Before I begin, I just have to extend thanks to a dear friend.

Sarah: I know these movies have had a large impact on you.  The only comparison I can rightly make, in my mind, is that Star Wars is to you as Buffy the Vampire Slayer is to me.  In fact, I can loop the two together and say that, in my mind, your love of Star Wars is akin to Spike’s greeting to Angel in “School Hard”: “You were my sire, man!  You were my … my Yoda!”  That if they were to ever betray you, you would curse them with the same venom with which Spike curses Angel.

So, for all that, I was very careful for a very long time to make sure you never found out that I’d never seen Star Wars.  The last thing I wanted was to receive a ration of shit from you, because I felt that you might take it as a personal affront.

And when I finally ‘came out,’ so to speak, in the absolute loosest of terms, and admitted that I’d never seen the classic trilogy … you said nothing.  And that means more to me than I can ever say.  So thank you.

Brad and John, on the other hand …

John: YOU’VE NEVER SEEN STAR WARS?
Alaina: Johnny …
John: I had a heart attack last year, Weevil!
Alaina: Johnny!
John: I do not need another one!
Alaina: Hey!
Brad: What’s going on?
Alaina: Nothing!
Johnny: Weevil’s never seen Star Wars!
Brad: WHAT?
Alaina: Okay, seriously?  I have too!  Just not in one sitting, or in chronological order!
Brad: You’re dead to me for the rest of the day.
Alaina: Oh, come on!

Tomorrow is May Fourth.  For those not in the know (people would say that should be me, but I’m savvy to the ways of geekdom), this date is also known as Star Wars Day: “May the Fourth be with you!” 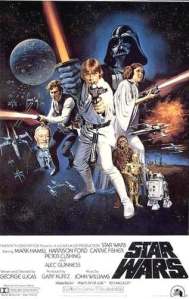 But before I do, here’s the moment where I prove, once and for all, that I am familiar with A New Hope and that I am only really watching it for a sense of finality.  Much like when I finally watched Indiana Jones and the Last Crusade four years ago: similar to theStar Wars situation, I had seen the whole movie, just not in chronological order, or in one sitting.

And so, without further ado, here’s the plot.  And I know that someone’s probably going to ask if I Wikipedia’d any of this, and the answer is no.  I don’t Wikipedia anything until after the fact.  The following is all from my memory, spotty though it may be.  Go ahead, tell me if I’m wrong.  (But not for 24 hours.)

It begins with a shot of a big spaceship (like in Spaceballs!  Gee, I wonder if that’s a coincidence!).  And then there are people walking down a corridor, and it may or may not be Darth Vader immediately, but anyway, it ends with a meeting between Darth and Princess Leia.  He wants her to surrender her realm to the empire, but she refuses, so he sends her back to the brig.  She creates a video message in her handy R2-D2 unit, and tells him to find Obi-Wan Kenobi, as he is her only hope.

We side-wipe to Tatooine, and a disgruntled young man named Luke Skywalker is pensive about his life.  He has a fight with his uncle and then goes upstairs and stares at the two setting suns.  At some point, he gets directed to go to town and pick up a couple of droids, or get C3P-0 fixed or something, but ANYWAY, he finds R2-D2 wandering the desert, like a robotic Jesus without the followers (or was it Moses who wandered the desert?  Both of them had wanderings in deserts, I think.  DON’T TELL ME, it’s not that important), and on the way back to the farm he gets attacked by Jawas and R2 and C3P-0 save him.  A button gets hit and the video of Princess Leia asking “Help me, Obi-Wan Kenobi; you’re my only hope” plays, and Luke thinks, “Hey — I wonder if that’s Old Ben Kenobi?”

So he finds Ben, somewhere, and shows him the video, and Obi-Wan agrees to help Luke help rescue Princess Leia.  But they’re going to need a pilot.  So they end up in this bar on the other side of the planet and run into Han Solo, who is the best pilot in the galaxy (but also the most reckless).  As they’re trying to convince Han to join their ragtag band of rebels, this asshat Greedo comes over and tries to pick a fight with Han Solo but HAN SHOOTS FIRST and Greedo dies.

Somehow, they figure out that Luke is powerful with the Force, and Obi-Wan agrees to train him in the ways of the Jedi, and there’s the scene on the Millenium Falcon where Luke is blindfolded and trying to light-saber the ball using the Force, and someone’s playing a game with Chewbacca and C3P-0 tells him to let the Wookiee win, and also, Obi-Wan Kenobi tells Luke that he knew his father, Anakin, and that they were good friends.

When they get to the spaceship, they dress up as Storm Troopers to go and rescue the Princess.  When they find her, Han realizes that she’s not a simpering idiot, because she calls him a scruffy nerf herder.  On the way out, trying to escape, they almost get stuck in a garbage chute, but somehow they escape.

Then they learn that Darth Vader has this amazing weapon, called the Death Star.  And it’s possible that, maybe, Darth Vader blew up Tatooine?  Or maybe Leia’s home planet?  I haven’t seen that scene in a while, I can’t remember.  ANYWAY, somehow, the find out about the Death Star, and they start researching ways on how to blow it up.

They join with the Rebel Alliance, and they find that there’s this little, tiny corridor in the Death Star that a TIE-Fighter can fly through and then it explodes it from within, so they decide to do that!  And Luke is decided to be the pilot while Han becomes the squad leader, and Leia is there, too.

Meanwhile, Obi-Wan goes off to attack Darth Vader and restore balance to the Force, but Darth Vader kills him, after strangling General Needo.  (Or is it Nado?  I can’t remember.)

But in the end, Darth Vader and his Evil Empire escapes to fight another day, while Luke, Han and Leia celebrate, in the wake of mourning Obi-Wan Kenobi.  And at the end, there’s a parade and Leia gives the boys medals, and there’s waving and happiness and they live happily ever after until the Empire Strikes Back.

And look, as I said up there: if I’m wrong, please don’t ruin it for me.  I’ll ruin it myself tomorrow night.