Glad I could vague it up a bit for you, Xander.  Sheesh.

Well, the other day, that completely vague thing happened to me, and on my way home I said, “Goddammit, I need to watch something where shit blows up.”

And Redbox had this: 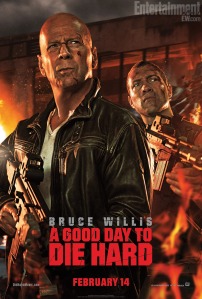 And I was excited.

Because guys — guys — I love Die Hard.  Die Hard is like, my spirit animal.  You may yell at me for all the movies I haven’t seen, including Pulp Fiction, Shawshank, The Godfather … but you canNOT yell at me for never seeing Die Hard.  It’s my most favoritest Christmas movie ever – even more so than A Christmas Story, although that may be a fun coronary for my mother.  “Hey Mom, guess what!  Instead of 24 hours of A Christmas Story this year, how about 24 hours of Die Hard?  Mom?  Mom, where are you going?”

I should hope by now y’all know that I also love How I Met Your Mother.  You should also know that I have purchased nearly every single book Mr. Stinson has published.  And in his first tome of epicness, The Bro Code, I learn that I was never wrong: 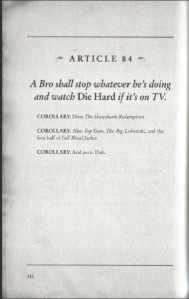 I’m not kidding, either.  EVERY. DAMN. TIME. I find it on TV, I don’t care how late it is, what channel it’s on, how close it is to the end or how many swears they edit out.  I will watch it to the end EVERY TIME it’s on TV.

(I would like to point out that I wasn’t talking about the corollaries.  I follow the main article, so PLEASE SHUT UP ALL OF YOU.)

But seriously, I am at the point where I can pretty much recite the entire ending of Hans Gruber.  Oh, Hans!  I almost forgot about Hans!  If there is a better villain out there than Hans Gruber, I will buy a hat and eat it.  Don’t say Darth Vader, guys, because in the end he gets all sentimental and saves Luke for the good of everything.  (People forget that underneath it all, Darth Vader was just a softie with a Napoleonic complex.)  Okay, maybe Belloq, but also remember, guys, that Belloq was really just an antagonist for Indy that was working for the man, and that man was Hitler, and Hitler was a real person and therefore not part of this argument.

And before you guys get me started on how I should have known this movie would suck, I mean, look at the last movie that came out, I must shout at you Blasphemy!  Live Free or Die Hard was, while not an instant!Classic in the vein of Die Hard 1.0, it was solid in its own right!  Guys, I’m not sure if you saw, but McClane killed a chopper!  With a cop car!  A COP CAR, YOU GUYS!  Because he was out of bullets!!! Plus, there was the whole generational-gap that happened when Justin Long’s character bitched about McClane listening to CCR, and kid, seriously?  Do you know who’s driving you?  That dude has killed TONS OF DUDES WITH LESS THAN A CAR and he could snap your neck with his pinkie.  Also, driver picks the music, shotgun shuts his cakehole.

So when I learned that they were making a fifth Die Hard?  And it was going to be in RUSSIA?  Dogs could not hear the sound I was making, I was so excited.  To go after his son, who we haven’t seen since Lucy pushed him out of the way to answer the phone back when the reporters were asking about what’s going on in the Nakatomi Plaza?  I was all, SHUT UP AND TAKE MY MONEY.

But then shit happened and I didn’t go to the movies at all.  Like, seriously — you want to know the films I’ve seen in theaters this year?  Gangster Squad – which was another regret, unless you’re addicted to Archer and enjoy .gifs of Ryan Gosling bringing bear claws to a party – , Iron Man 3, Iron Man 3 again, and The Hangover Part III.  That’s it.  That’s all I’ve seen.  Right?  (thinks again … )  Yeah, I’m pretty sure that’s it.

But luckily, A Good Day to Die Hard zoomed into Redbox, and for a buck fiddy, I brought it home.

You guys … you guys.  I am … so disappointed, I can barely talk about it.  Like, almost not at all.

I didn’t even finish the movie.

It was just … awful.  From the get-go.  There were too many Russians, too many subtitles, and not enough John McClane being awesome.

From what I saw, John’s son Jack hasn’t been heard from for a couple of years.  One of McClane’s cop buddies finds a lead on him — presumably because John still doesn’t know how to use a computer — and finds him in a Russian jail.  So John gets on a plane to, I dunno — rescue Jack, I guess?

Here’s point number one (that may have been cleared up in Die Hard II: Die Harder or even Die Hard: With A Vengeance, because close viewers of my blog may have noticed that I have skipped watching Parts Deux and Trois in the Die Hard franchise because I’VE BEEN BUSY, OKAY): Since when is McClane okay taking a plane ride to Russia?  THE FUCKING FIRST TIME WE SEE MCCLANE, he’s freaking out during the plane’s landing in LAX when he visits Holly.  Random Dude comments on how he doesn’t like flying and tells him to make fists with his toes when he gets back on land.  Maybe he’s taken some intense flight therapy since then, a la Marge Simpson —

— but McClane doesn’t seem the type to parlay with therapy.  So, where did that bit of characterization go?

Also, it felt very very stupid for McClane to head off to Russia to find his son.  And here’s where I truly felt, where I didn’t with Live Free or Die Hard, that they are just looking for ways to continue to pay Bruce Willis.

In the first Die Hard, McClane is truly in the wrong place at the wrong time.  He has no idea that Gruber and his team have planned to take over Nakatomi Plaza and hold all the partygoers hostage in an attempt to steal $600 million dollars worth of stocks and bonds.  But when his wife — and other innocents — are threatened, McClane takes the opportunity and wages a one-man war against the Germans.  He basically MacGuyvers himself into a superhero using his resources and his wits.  He saw a desk chair and a Santa hat, a piece of paper and a Sharpie, and decided to taunt the guys to let him know that, not only has he killed Marco, but now he has a machine gun — ho, ho, ho.

But in Good Day to Die Hard, McClane seeks out the trouble.  And apparently he had no idea that Jack was a member of a covert CIA ops group (OH MY GOD HE BELONGS TO APO WHERE IS MY DIE HARD/ALIAS CROSSOVER NOW) (no seriously, some day I will write a crossover of epic proportions where McClane is, like, on a field trip and accidentally bumps into Jack Bristow and it will be GLORIOUS), so when he arrives in Russia, he has no idea that his son is in the middle of an op, and it’s totally awkward and unnecessary.

And look, guys — McClane is awesome.  He is smart, and savvy, and USED PACKING TAPE to secure a SECOND GUN TO HIS BACK so he’d have it, and did you hear the dialogue between him and Hans?

Gruber: This time, John Wayne does not walk off into the sunset with Grace Kelly.
McClane: That was Gary Cooper, asshole.

I think what caused Good Day to Die Hard to suck so badly was that they took away how McClane was awesome in the first film, and decided to just go with big explosions and set pieces.  There was no emotional pull to McClane tagging along with Jack (what little I saw); there was no sense of urgency to get the problem solved.  He was just … there.  Following his son, and acting like a grumpy old goat when he didn’t get his way.  And while in Live Free he was kind of collateral damage, acting as the Mac guy’s chauffeur to make sure terrorism was foiled, it wasn’t until Lucy was kidnapped by Timothy Olyphant that the stakes were raised on a personal level for McClane.  In this movie — again, what little I saw — there was nothing at stake emotionally.  You pretty much knew that everyone was going to get out alive (did they?  I didn’t see the ending), whereas in Live Free, there may have been a moment where I thought that Lucy might actually get hurt (which would cause a rant of a different color, but luckily, you’re saved from that tonight).

I don’t know, you guys.  I had such high hopes for this, because Die Hard is such a fantastic movie and I’ve liked every installment that I’ve seen so far (shut up, all of you who saw my list), and you guys, it takes a lot of shit for me to not like something that I loved wholeheartedly before.  It wasn’t until I saw the episode of South Park that proclaimed that Steven Spielberg and George Lucas raped Indiana Jones that I truly saw Crystal Skull for what it was: crap.  And while it’s not as great as the original, I still loved Boondock Saints: All Saints Day enough to see it three times in theaters AND buy the DVD.  And I liked Live Free or Die Hard!  I liked it, you guys!  I really liked it!